Additionally, paste this code immediately after the opening tag:

Aquaporins are crucial for life in all organisms, from bacteria via plants to man. They facilitate rapid, highly selective water transport across the cell membrane, thus allowing the cell to regulate its volume and internal osmotic pressure according to hydrostatic and/or osmotic pressure differences. The special architecture of the aquaporin channel allows only water molecules to pass while all other compounds are rejected. The importance of the aquaporin in human is perhaps most conspicuous in the kidney, where ~150-200 liters of water need to be reabsorbed from the primary urine each day, that is, aquaporin facilitated water transport is invoked when water rapidly must be retrieved from a body fluid.

These channels are so important to life on earth that in 2003 the Nobel Prize in chemistry was awarded to Professor Peter Agre for his discovery of the aquaporin water channel. 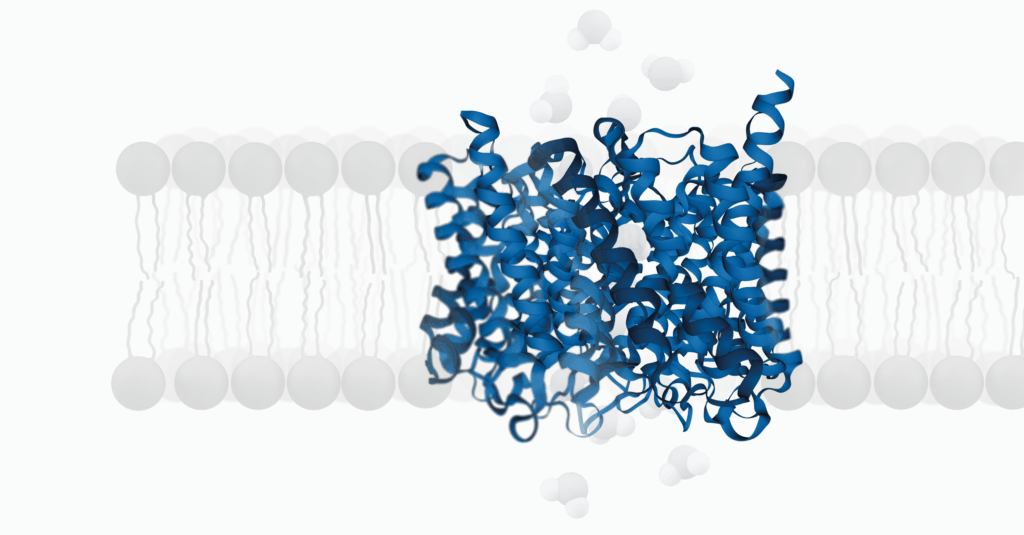 Aquaporin A/S now uses this discovery in its development of water filtering devices to be employed in industrial and household water filtration and purification.

Traditional separation membranes are mostly dense polymeric films where advanced chemistry is used to control the surface properties of the films produced. A wide range of polymers and production techniques are used resulting in a great diversity in structure and function of separation membranes tailored to a wide variety of applications. Separation is usually described in terms of pore/solute size, pore/solute charge and dielectric effects, coupled with diffusion or convective flow. In simple terms, most synthetic membranes may be broadly described as polymer sheets containing micron to nanometer sized holes.

In contrast, biological membranes exist in a bewildering complexity and despite dramatic progress in our understanding, this complexity remains a major challenge in our molecular understanding of how living cells maintain their integrity and perform their function. These natural membranes exhibit exceptional mechanical and chemical stability to a wide range of different external stresses and thus have been a primary source of inspiration for artificial biomimetic membrane systems. Natural building blocks like lipids and artificial components mimicking these called block-copolymers are extensively used to create an artificial water filtration membrane. By focussing on specific components and features like the aquaporin protein and its stabilizing cell membrane, we have made it possible to develop a biomimetic membrane and thus harness nature’s tremendous capability for selective membrane transport. Today the technology is commercially available in the form of Aquaporin Inside® membranes for both forward osmosis (FO) and reverse osmosis (RO) applications.

Please refer to Aquaporin A/S for further information about technology, products and services.